Skip to main content
Proudly Sponsored By
Club Logo
Created By
Catchup on all the latest action from ${round}!
Loading…
Watch every match live and on-demand...
Loading…

Nick Blakey didn't want to lead anyone on. He had been asked and asked where he was going to nominate for this year's NAB AFL Draft, and was tired of giving answers that weren't the full truth.

So in April, Blakey confirmed he would be nominating Sydney as his club of choice, where he can join as an Academy selection and where his father John has been a long-time assistant coach.

Blakey could have joined North Melbourne or Brisbane as a father-son pick, given John’s illustrious career at both clubs, but the lure of staying in Sydney, and playing for the club he supports, was too hard to pass up.

The 18-year-old has also become close with a number of younger players at the club through his Academy involvement so will be able to comfortably transition onto the Swans' AFL list after the draft.

Blakey showed his prowess as a key forward earlier this year while playing for the Swans in the Academy series, finishing second in the Harrison Medal as the best player in the series.

When stationed in attack, the 195cm forward is good overhead, quick on the lead and tough in the air. He is a raking long kick and is agile when the ball hits the ground, making him difficult to stop.

Despite his size and presence as a forward, Blakey sees himself playing in the future as a midfielder. We saw that when he was playing for the Allies in their final game of the under-18 national carnival, when Blakey moved into the midfield and helped turn the game with his powerful clearance work from the centre.

The injuries Blakey has suffered over a couple of years would have to be of some concern. Last year, as a bottom-ager, he missed the second half of the season with stress fractures in his back, and this season’s ankle issues have seen him off the park for a large chunk as well.

His durability is a question and because of those injuries he hasn't been able to build up his strength, so will have to start as a third tall forward instead of someone who can hold down a key position.

Blakey moves a little like Essendon goalkicker Joe Daniher when he's stationed in attack. He isn’t quite as tall as Daniher, but Blakey can swing onto that left foot, take strong marks and is also adept at grabbing the ball at ground level and snapping clever shots at goal.

Blakey will receive a bid in the first round, most likely in the No.5-12 range. The Swans accrued more draft points during the trade period to be able to match a bid for the talented youngster.

The Swans will get another big win from their Academy in Blakey, following the successes of Callum Mills and Isaac Heeney. He has a very smart footy brain and can impact games in a number of ways. 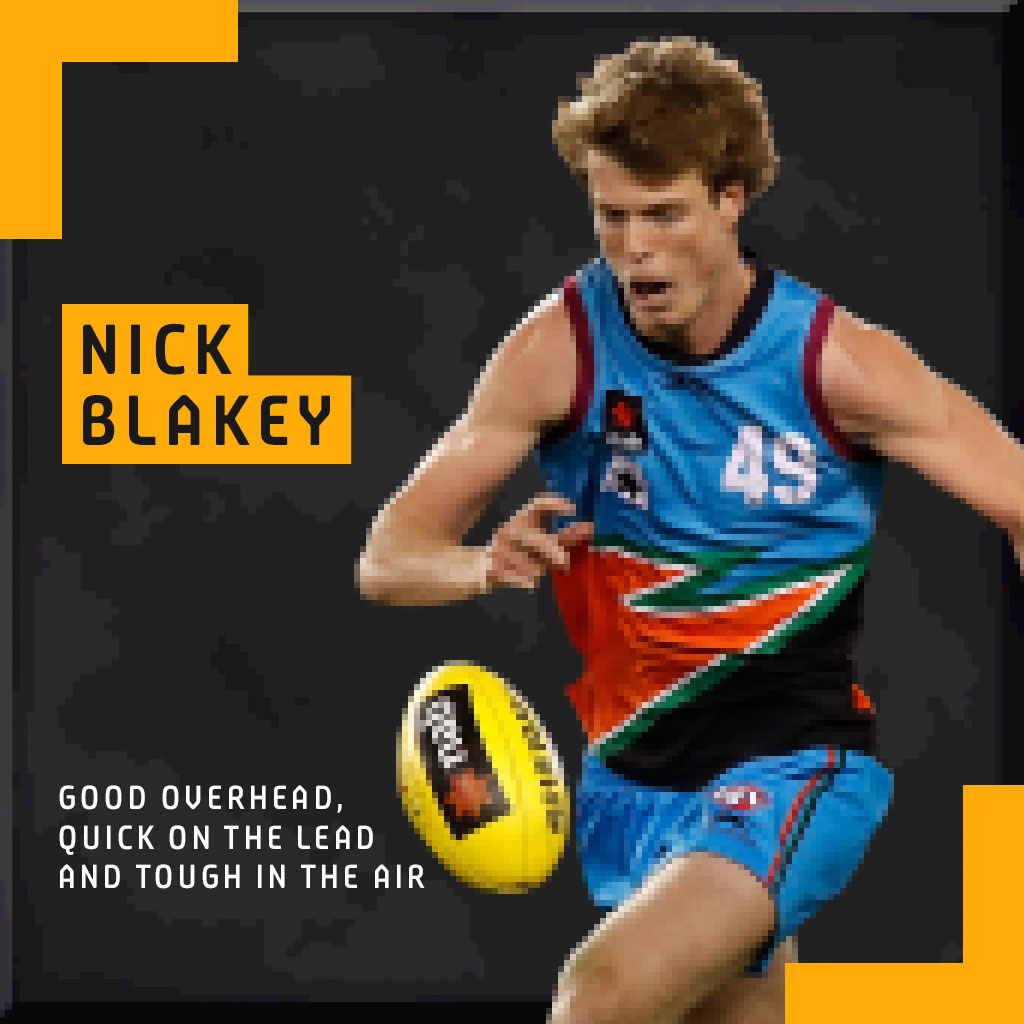 North Media has taken a look back at the history of the numbers our new recruits will take.